There were 20 teams, totalling to 267 players across 10 different countries, showed up to flex their party and frisbee skills at the Lotus Desaru Resort and Spa on Sep 8 – 10.

Beach Tournaments have became more popular in the recent years, with Boracay Open being the most popular beach tournament in the Asia Region. Being hosted with the same weekend as the Hong Kong Beach Hat, Desaru Sand It was held to cater to players from the South East Asian region. One of this tournament’s unique attraction was housing all players in the same resort which allowed everyone to mingle across teams 24/7, partying from day 1 – day 3.

One of the commendable rule of the tournament loved by the players was the strict 2:2 ratio of Male and Female players. The tournament directors, Wei Wen and Wei Li, wanted to present a unique opportunity to support gender equality in a way not found in the regular 7 a side or 5 a side games and created an even playing field for both men and women.

Another unique format for the gameplay was the double point score ruling whenever a point is scored from endzone to endzone. This meant that anyone could make a comeback at anytime throughout the 40 minute game.

The final match between Pancake (Philippines) and Sepanx (mixed of South East Asia players) was a very tight one. The double point score ruling allowed Pancake to make a come back from trailing 3 points behind to win the tournament 15-13. (You can catch the recorded finals by Pancake here).

Superfly came in 3rd after beating Durian Jali Deep, while the spirit award was tied between Kuji Kuji and Two Hand Pancake. The male and female MVP awards went to Matthew Pan and Christina Hunter respectively.

Many players took this tournament as an opportunity to break away from their usual club teams and form unique theme related teams. You could tell players were putting spirit and fun as a higher priority than winning this tournament when there were hilarious team names like Ms Ng’s PE Class, Muscular Nelson’s Team, United Pigdom and 6 food related team names.

Muscular Nelson’s Team were formed with players from Singapore, Bangkok and Malaysia (who met at Chiang Mai Hat), to have lots of fun with all the players and “winning” the party. “We made sure to have a spirit game with our opponents just to inject some fun and make some new friends!” said Julia Low from the team.

Amanda Quah from United Pigdom shared “Majority of us studied in the UK together and played against each other during all the Malaysian games there. We thought it would be fun to combine forces and play on the same team this time and that was how the team was formed. The reason for our name is because we eat like pigs and we met in UK so together, it’s United Pigdom.” 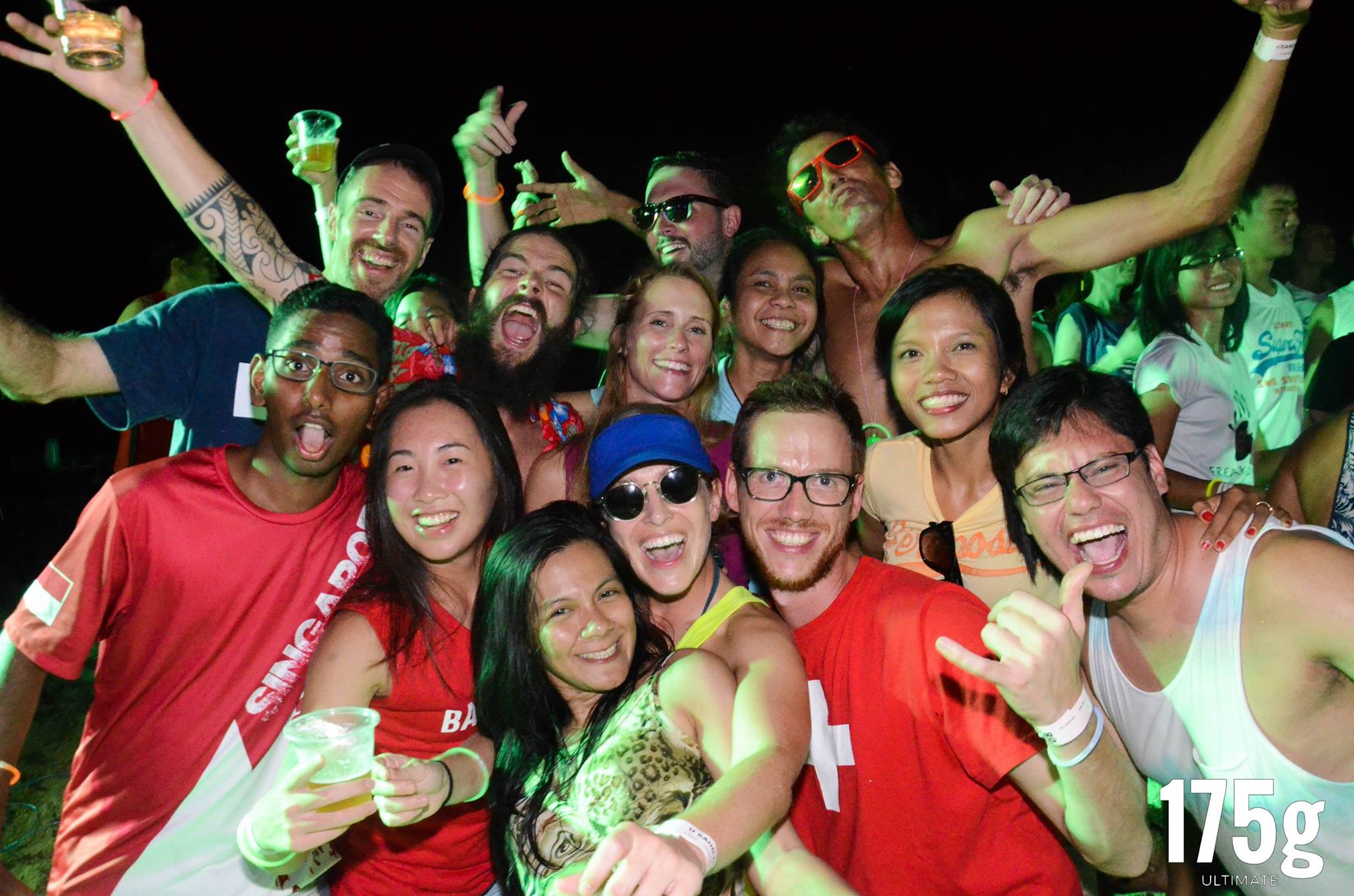 As for the party, the organisers, Badgers Ultimate, made sure there were endless beer throughout the party (yup free flow beer!). They also had a contest named “Beawatch”, where participants were required to act out scenes from the Baywatch series to win. Marc Pop, from Durian Jali Deep, won the contest and stole the show with his sick moves on the dance floor.

With free flow beer during the party, day 2 was very much a test on who could pull their “I beat the hangover effect” A-game to the beach. “One of our teammates, Jocelyn (who was still hungover from the night before), did a layout D and then continue to stall her opponent who was without the disc. She then only realised it after stall 5!” shared Julia Low from Muscular Nelson’s Team.

Both the Tournament Directors were very grateful that everything went smoothly in accommodating players on and off the beach from the moment they checked into till they checked out. “Our organising team worked really hard around the clock to give everyone a good time. Lots of credit goes to them for being the last men standing after the party, but first ones out of bed” shared Wei Li.

“We also would like to give a shoutout to the amazing staff at Lotus Desaru who were right there with us from the planning stages till the end of day 3. They made all the difference.” expressed Wei Wen.

Be sure to catch next year’s Desaru Sand It. With free flow beer during the party, 3 days of buffet and awesome party organised at a nice resort, your money will definitely be very well spent. Oh and if you plan to come next year, try topping this

Also if you have any upcoming tournaments, do submit a link to your tournament page here.

We are also looking for any article contributors who also wanna share their story of past tournaments or your frisbee local scene. Contact us here.